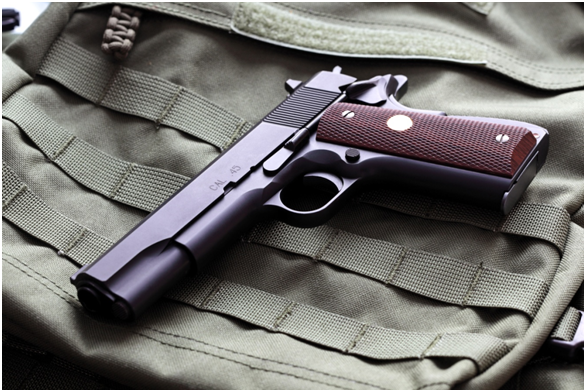 There are very few handguns - perhaps very few firearms at all - that can claim the iconic essence of the M1911. In the years since its design and release, it has been spread like wildfire throughout all corners of the world, wherever a need for a handgun could possibly arise. It served as the standard-issue sidearm for American soldiers through both world wars. Its design has been modified, adapted, even directly copied. It has been called the greatest pistol ever, and there are some that might call it the ‘greatest’ firearm of all time. It can be hard to quantify or even qualify such a claim, but if one can call out metrics for popularity, recognizability, functionality and reliability, the M1911 would be at the top of any list. 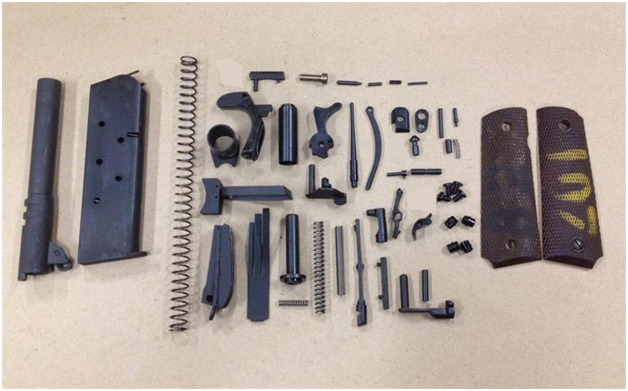 There are so many reasons that the 1911 became and has remained one of the most popular handguns of all time that it can be very difficult to narrow them down to only a few for the purposes of investigation. That being said, although it depends on the person being asked, there are few chief reasons that the 1911 claims such enduring popularity, widespread use, and endless chamberings and configurations.

The 1911 Is A Piece Of American History
This may be the most subjective metric of any investigated herein, but no one is going to argue about the undeniable fact that the 1911 is a piece of history. The M1911 is one of the most iconic firearms ever produced and by one of the most influential manufacturers in the history of American arms manufacturing. John Moses Browning, who was the father of such other influential designs as the Browning A5 autoloading shotgun and the Browning Automatic Rifle, was the man behind the design of the 1911.

American soldiers, at the turn of the last century, were predominantly armed with Springfield bolt operated rifles and .38 caliber revolvers. We will leave it up to the reader to formulate his or how own prejudices for or against a repeating rifle’s efficacy in close quarters combat, but we will state that soldiers were experiencing difficulty centering around the inadequate firepower of their sidearms. They needed an autoloading pistol in a capable chambering that could bring more stopping power - and potentially a higher capacity - to the field.

Due to the demand for an autoloading pistol in a more capable chambering, Browning designed the Colt Model 1911 pistol, chambered in .45 ACP. Recoil operated, magazine-fed and remarkably dependable while offering the legendary stopping power of its 45 caliber round, that model 1911 became the pistol that set the standard for other semi-automatic models to follow.

Since its introduction and the first service that the model saw in border skirmishes with Mexican insurgents, the M1911 has been carried by American troops through many global conflicts including both world wars, the Korean War, the Vietnam war and many other conflicts. Its dependable action, comfortable, ergonomic styling, and simplicity of use have endeared it not only to the servicemen who made it famous but to law enforcement officials and civilians who came to carry it for the same reasons. There’s no denying the historical impact that the Colt M1911 has had on so many pistols that came in its wake.

Dependability and Accuracy
While it might be difficult to quantify the effects that the M1911 has had in terms of it historical impact, it’s much easier to take an in-depth look at the components and design of the platform that endear it to so many who carry it. Certainly, there are collectors and competitors who own 1911s for their historical weight, but there are just as much who appreciate the design of the platform, the dependability of the action, and the power and accuracy of the handgun.

To begin with, there are many who carry a 1911 for self-defense, even for concealed carry, and over a hundred years since its introduction, at that. The original Government frame, though it is nearly 9 inches long, is fairly slim and doesn’t print as readily as many other handguns with wider or more conspicuous silhouettes. It can’t be called compact, but it can be concealed effectively.

Yet its compatibility with those who carry concealed is far from what sells it as a handgun for self-defense. Now, so far removed from its introduction, a 1911 can be found chambered in just about any cartridge you desire, but its original chambering of .45 ACP is still a crowd favorite. Wildly powerful, reliably cycling and widely available, the .45 ACP is still a go-to for many who carry a 1911. Much can be said of the ballistics of the .45 ACP, but we’ll let history speak for that. It is a time tested and proven cartridge that is immensely capable at short range.

Yet that only covers those who rely on it for concealed carry and self-defense. There are still those who learn to shoot on a 1911. In fact, there are many who compete, by choice, with a 1911. There is one feature of the model, that above others, make it a pistol of choice for competitive shooters - the trigger.

Unlike the triggers on so many other models of handguns in specific and firearms in general, the trigger of a 1911 travels along only one axis instead of along two. It does not revolve around a fixed point. In other words, the trigger travels directly backward. A trigger that travels in only one direction is a boon to target shooters as it helps minimize the forces being imparted to the platform as the shooter lines up the sights and prepares for a shot. Experienced shooters need to balance fewer factors in their muscle memory when dealing with a trigger that travels along one plane.

There’s something else that goes along with the dependability of the trigger, and that is the all-metal frame. Few materials, if any, can match the strength of a solid piece of milled steel such as the frame of the 1911 is. There are lighter materials, and there are even materials that are corrosion resistant. But with proper care and attention, the frame of an M1911 (and the rest of it) will outlast anything else out there.

What comes with a handgun that offers a clean, crisp trigger that travels predictably along only one plane and is not too light in the hand? You guessed it - accuracy. Despite its age, the M1911 has been used to great effect by match shooters who practice religiously with it. When your 1911 tuned, or even build your own model, you can create a firearm that is an extension of your body, but we’ll touch on that in a moment.

The 1911 Is Comfortable To Handle And Shoot
If nothing else can be said of the 1911, it can be said that the platform is enormously popular if for its comfort alone. The entire platform of the pistol is comfortable to handle and fire. It is slim and feels solid in the hand without impressing the shooter excessively with the weight it brings. The Beavertail grip safety on the 1911 is an impressively comfortable feature of the platform, and cushions the grip while handling and firing. As for the matter of the weight, the 1911 brings an all-metal construction to a market that is becoming increasingly saturated with high-density polymers and synthetics. Although there are lighter, slimmer handguns out there, the 1911 feels solid in the hand. There is a place for subcompact, synthetic-framed pistols, but there is a place for the 1911. Its popularity, year after year, only proves that.

Build Your Own With A 1911 Build Kit
So we’ve performed a cursory investigation of why the 1911 has proven such an influential and popular handgun. Any of the things we’ve touched upon might serve to endear the Model 1911 to you, and you may have even considered creating your own 1911 from a  1911 build kit. There are many reasons why you might want to create your own 1911 from a 1911 build kit, and right here at Sarco Inc., we offer kits so you can create your own 1911 and have a hand in the process. Your interests may be purely historical, you may desire to build your own match grade sidearm, or you might just enjoy the process of crafting your own 1911, and they’re all equally valid. 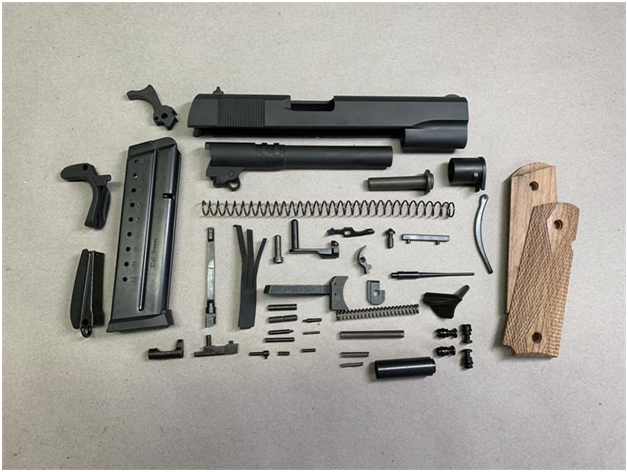 The first and most tangible reason you might want to create your own 1911 from a 1911 build kit is to have that pride of ownership that just doesn’t come with something that’s store-bought. It’s the same reason that so many hunters buy muzzleloader kits and put their muzzleloaders together themselves. The fine detailing and fitting, the finishing of the stock, the adjustment of the sights - all of those things bring you closer to the tool you create and engender a bond that cannot be artificially reproduced. As a hunter will feel immense pride in harvesting game with a rifle he had a direct hand in creating and fine-tuning, so will you as a target shooter, for example, feel much more pride scoring with a pistol you created yourself.

To that end, there is much more that comes of creating a 1911 from a 1911 build kit than just the pride of ownership. Considering the fact that you can fairly easily adjust the platform as you’re putting it together, you can potentially make alterations to the setting of the trigger or the sights you incorporate into the platform while you’re building it. There are so many aftermarket parts available for so many different models of 1911 due to its popularity and widespread use that you’d have little trouble customizing the platform to your use. It hardly matters if you wanted to tailor the firearm to competition shooting or just customize it for display, customizing a 1911 from a 1911 build kit could be both an enjoyable and a practical endeavor. 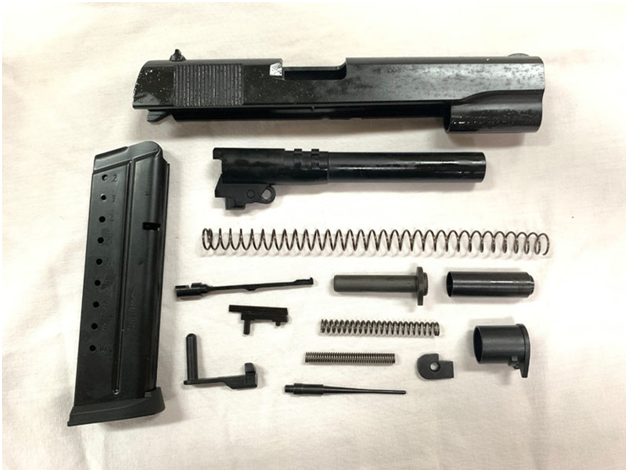 Building your own 1911 from a 1911 build kit can offer you an enjoyable challenge and result in a 1911 that is enormously tailored to your purposes, whether for self-defense, target shooting, historical reenactment or any other use you can imagine. On top of all that, it can be an educational experience as well, as you will gain an intimate familiarity with the parts and construction of any firearm you undertake to assemble yourself.

You’re in the right place, too, because right here we offer build kits for 1911s so you can reap the many rewards of putting together your own 1911. Take a look here, where you will find a build kit for a 1911 chambered in 9mm. It includes all of the internal parts and needs only a single stack M1911 frame for complete assembly. If you’re interested in a parts kit that is centered around the original chambering, take a look here at our . 45 build kit.

We mentioned that the 1911 is one of the most imitated and versatile pistols on the market, and a part of that is in the number of compatible parts and components that are available for it. Right here at Sarco Inc., you can find a wide range of parts compatible with many models of 1911 pistols, including  upper parts sets, stock assemblies, grips, magazines, frames, barrels, and internal hardware like springs, pins and many other parts. In fact, even if you don’t want to put together the entire pistol from scratch and only need a set of hardware for tuning or replacement, we can offer that as well. We even offer peripheral accessories like holsters and magazine pouches. Take a look through our pages to find exactly the parts you need, and if you need any help sourcing a specific part, give us a call at 610-250-2960. We’d be glad to help you find what you need.