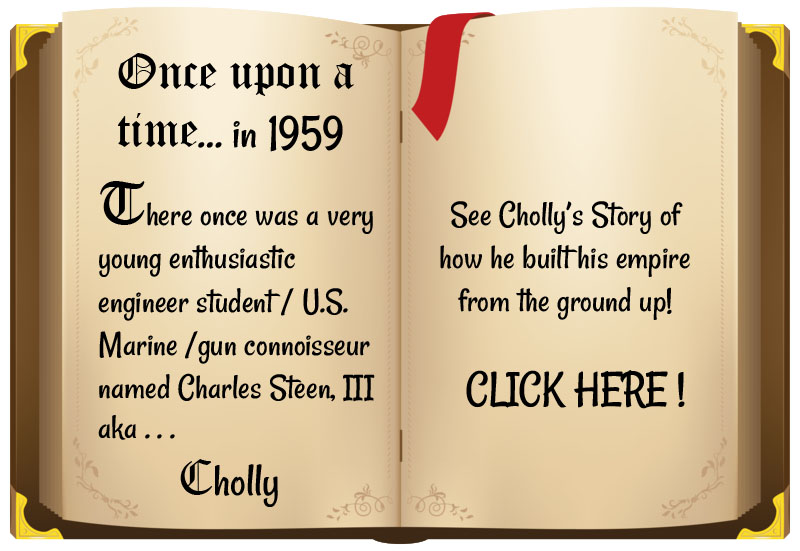 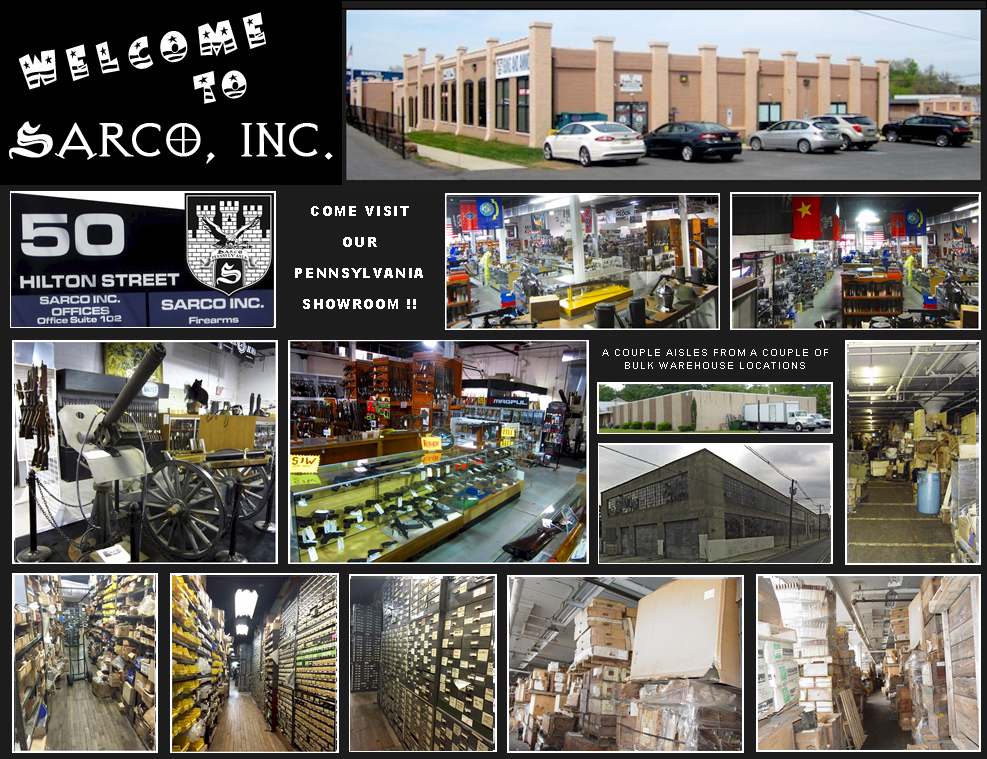 In March of 2020, The Firearms News came for a visit and took a few videos of Cholly and his story!
Check them out !!
How We Became Passionate About Gun Accessories

There once was a very enthusiastic young gun connoisseur named Cholly Steen, III. His passion for the industry started an incredible collection of guns, parts and gun accessories - so many that he had to find places to put everything. He began to store everything he had way up high in the tower of his castle, or rather, the attic of his apartment. It wasn't long before he decided he needed a name for his collection, thus the "Steen Armament Research Company" was born, better known now as Sarco, Inc.

Welcome to Sarco, Inc., one of the world’s largest wholesale and retail suppliers of firearms, firearms parts, gun accessories, and associated material. Sarco, Inc. buys and sells internationally all types of firearms gear, new and used, military and commercial. We have been serving sportsmen, collectors, dealers and brokers for 50 years !  [ 2020 update - 61 years... and counting ! ]   No deal is too big or too small.

The leader in firearms parts and accessories.

What today is arguably the largest dealer in surplus military material in the country, SARCO (an acronym for Steen Armament Research Company), Inc., of Easton, Pennsylvania, actually began quite humbly in the attic of a small apartment. Charles "Cholly" Steen, the company's founder, recalls his next major expansion came by moving into a barn some years later, and then into his first store, all in the anti-gun state of New Jersey.

Living in a Toy Store

After several years in business as a non-corporate entity, Sarco was finally incorporated in 1962. It has since established a long tenure of 38 years in the arms business. Sarco, Inc.'s emphasis is strictly focused on surplus merchandise. Although we do sell commercial-type material, virtually all of our business centers around the accumulation of surplus material.

Through the years, Sarco, Inc. has expanded into almost every facet of the gun business, except for the commercial end. Much of the business is done with military arms collectors, shooters and military history re-enactors. Steen describes his business as having allowed him to, "live in a toy store all these years."

Steen began collecting militaria at the tender age of five when he began to fill the drawers of his clothes dresser with military surplus. "I'm a collector at heart," he chuckles. He later served in the U.S. Marine Corps, and afterward began selling arms at gun shows as a way to support himself during college. Though Steen studied engineering, he had plans to become a machine gun designer. When he told his wife of his intention to become a part-time gun show vendor, she made an agreement with him that if he did not clear $60 a week profit from the activity within the first year, he would give up on the idea. However, Steen's very first weekend at gun show dealing gave him a lot of incentive to stay in the gun business. He made $200 during those first two days, a whopping sum for him at the time.

Another big coup for Steen's fledgling business was expanding into mail order by advertising in the then new publication, Firearms News. In contrast to the multiple full-page ads Sarco, Inc. now runs in that advertiser publication, his first ad was just 3-inches by 3-inches in size. Steen estimates Sarco, Inc. is the Firearms News' longest continuously running advertiser. Today, sales by mail order make up the largest part of Sarco, Inc.'s volume, with sales to U.S. and foreign governments playing the next largest role.

Traveling around the world in Sarco, Inc.'s early years during the 1960's, Steen built up a global network of agents who remain on the lookout for surplus materials when such items are offered from military and government sources. The agents alert Steen to the items being offered and bidding/purchase procedures. Steen says his import activities over the years have probably earned him the distinction of being the largest U.S. importer of gun parts.

Overseas manufacturing is another area of the business that has been developed. For instance, Sarco, Inc. has slings for the Mauser 98 and Johnson rifles made overseas, in addition to 400-500 other items. Steen got into the machine gun part business by offering parts for .30 and .50 caliber Brownings. Sarco, Inc. does sell live machine guns as well. We have a wide assortment of non-firing rebuilt machine guns (with a dummy receiver) available and machine gun parts sets (sans the receiver).

Among the more notable surplus material Steen has sold over the years was a model 95 Gatling Gun with limber which went to Bill Gasser of the American Armour Foundation museum in Long Island, New York. The serial number of this piece was in the same range as were the Gatling Guns shipped to Cuba at the time Teddy Roosevelt was there.

Steen also bought the Rock Island Armory's military manual library containing seven to eight tons of manuals. In one of his more unusual purchases, Steen bought several Navy model KDB-1 remote controlled drones. These were used in the 1950's and 1960's for training in air-to-air and ground-to-air combat. They are radio-controlled targets that could be recovered after a parachute landing.

Made by Breech Aircraft and powered by a 125 h.p., 6 cylinder, 2-cycle, turbo- supercharged engine, the drones are 15-feet long and have a 12-foot wingspan, making them the largest, radio-controlled airplane models you can get.

Sarco has successfully fulfilled several contracts with the federal government and recently supplied the feds with 17,000 units of a multiple magazine holder. This product holds two magazines, in a "V" configuration on the underside of the M16 rifle. Once the first 30 rounds are fired, the holder allows another magazine to be inserted into the rifle within seconds.

In a recent deal, Sarco, Inc. purchased much of the production facilities of the old High Standard Co. This included nine models of pump and automatic shotguns including the famous Model 10B bull pup police shotgun, three models of pump and semi-auto .22 rifles, and ten models of revolvers.

The deal also encompassed Sarco, Inc.'s acquisition of all fixtures for production, drawings, sources, flow schedules, spare parts (including barrels and receivers), five cut-away guns, five trademarks for revolvers and technical data on High Standard silencers. There are also tons of spare parts, filling some five 40-foot trailers. "We bought this as a project to produce guns," Steen says, "but there just isn't enough time in the world for us, as new deals keep coming in. We expect that with the making of a few parts, approximately 400 Model 10B's could be produced." The lot was being offered for sale at the time of the author's visit.

Today, Sarco, Inc. employs up to fifty persons in its 20,000-square-foot store/warehouse, with an additional two warehouses comprising 7,500- and 24,000-square-feet respectively. "While I thought this second (24,000-square-foot) warehouse would be the last I would need, we filled it up to capacity due to the good deals I have been offered on merchandise from my suppliers," Steen says. About 20,000 guns, mainly surplus military rifles, are kept in stock at the store. Sarco, Inc. usually has some live, transferable machine guns in stock as well. At the time of the author's visit, these included: a Walther MPK; IMI Micro, Mini and commercial UZI submachine guns; and the Galil in .223 and .308.

Among his other activities, Steen is president of the F.A.I.R. (Firearms Importers' Roundtable) Trade Group, which protects the interests of firearms importers by monitoring legislation and other activities. The organization was founded in 1994 and has its headquarters in Washington, D.C. FAIR's membership is composed of firearms and ammunition importers, manufacturers, distributors and sales representatives.

The group's goal is to keep the American firearms and ammunition markets open to the global community of suppliers, with an end goal of a "level playing field" that will provide American consumers the broadest market choices.

The Clinton-Gore Administration had taken the position that global commerce in firearms and related items is the "weak link" of the American firearms industry. The Administration had taken its anti-gun campaign global by working closely with international disarmament groups and the United Nations to push the anti-gun agenda worldwide. FAIR has been very successful in keeping American markets open, but Clinton and Gore had achieved some significant victories as well. These include: -use of Presidential Authority to impose and continue an embargo on the importation of firearms, parts and ammunition from China. This ban led to the formation of FAIR. -Use of Presidential Authority to direct the Department of Treasury, in collaboration with the Department of State, to implement a Voluntary Restraint Agreement with Russia banning the importation of various guns and calibers of ammunition. --Establishing a new policy on, "foreign policy grounds," that the Department of State shall be the agency having jurisdiction over the authorization of the importation of foreign and U.S. origin firearms component parts and ammunition, instead of the Bureau of Alcohol, Tobacco & Firearms, since the policy of the State Dept. is not to approve such transactions.

Sarco, Inc. is your stop for gun accessories. We're passionate about guns, and we're proud to say we’re one of the largest gun suppliers in the world. Check out our inventory online or give us a call today.