Between 1931 and 1945, the German Wehrmacht developed a series of camouflage patterns that were used by the armed forces and Waffen-SS of Nazi Germany throughout the Second World War.

If you’re collecting realistic military reproductions, field gear, or uniforms for the purposes of reenactment, it’s helpful to be familiar with some of these patterns.

An interesting fact is that many of these patterns are named after trees, such as plane trees, oak leaves, and palm trees. These names were invented after the war to describe individual patterns. No contemporary accounts of official names for these patterns exist.

These are some of the most common camouflage patterns found on WW2 German reenactment gear and in period militaria.

Developed in 1931 and issued between 1932 and 1945, the Splittermuster pattern is the classic WW2 German Heer (Army) camouflage pattern, although it was also used by the Luftwaffe and Fallschirmjäger.

The pattern consists of green, brown, and beige geometric shapes that were apparently inspired by the natural colors of sunlight on foliage and earth. It looks a bit like U.S. Woodland, except the patterns are sharper and geometric instead of being rounded.

It has also been called the Heeressplittermuster, Buntfarbenaufdruck, and Splinter pattern, and was used by all units except the Waffen-SS. It was used to produce Zeltbahns, helmet covers, smocks, overtrousers, and more.

The Sumpfmuster pattern, which has also been called the Swamp pattern, was introduced in 1943 and was a widely used pattern that derived from the Splittermuster which was used by all other units.

Like the Splittermuster, the Sumpfmuster pattern was used by the Heer, Luftwaffe and Fallschirmjäger.

This pattern consists of dark beige, green, and dark, warm, almost maroon-colored geometric elements. However, unlike Splittermuster, the Sumpfmuster pattern was warmer colored - almost swampy (hence the name) - and the geometric shapes that constituted the pattern had blurred edges.

It was used in the production of field jackets, helmet covers, smocks, overtrousers, and more.

In 1944, the pattern was updated and has been referred to as Sumpfmuster 44 by historians. The updated pattern used the same colors, but featured a more diffused look with subtler blurring at the edges of the shapes that made up the pattern.

Some garments produced in Sumpmuster 44 were reversible, with white or snow camo patterns on the reverse side.

The Heer, Luftwaffe, and Fallchirmjäger were not the only forces that were equipped with special camo patterns. The Waffen-SS units were also outfitted with unique camouflage patterns that were developed specifically for them.

The Platanenmuster, which is also known as the plane tree pattern, was specifically designed for the Waffen-SS by a professor named Otto Schick. They were intended to replicate the patterns produced by sunlight on natural foliage.

The first of these to be developed was the Platanenmuster, in 1937. There were six variations of Platanenmuster that were used between 1937 and 1943.

A unique fact about the first two variations of this pattern is that they were non-repeating. Well, specifically, the patterns were printed on screens that could be used for Zeltbahns or as tents, and the pattern did not repeat itself across the printings.

Later variations did repeat themselves at certain intervals. These patterns were used to create field shirts, caps, Zeltbahns, helmet covers, and more. Garments were frequently reversible and contained a spring pattern on one side and a fall pattern on the reverse. 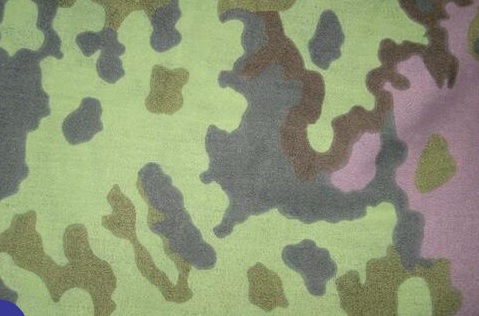 Eichenlaubmuster, also known as the oak-leaf pattern, was a widely used late-war pattern that was issued to units of the Waffen-SS. Between 1941 and 1945, two variations were developed.

The oak leaf pattern consists of several different colors, including black, gray (which looks purple), beige and green in a dappled, overlaid configuration. These patterns were produced using rollers and unlike the first two variations of Platanenmuster, repeat every 44cm.

The Eichenlaubmuster was used to produce a wide range of garments and gear, including but not limited to Zeltbahns, helmet covers, field shirts, coats, overtrousers, and some camouflage uniforms.

Many garments that were produced in Eichenlaubmuster were reversible, with spring patterns on one side and fall patterns on the reverse.

The patterns mentioned here are not the only ones that were used by the Wehrmacht and Waffen-SS during World War II. Consequently, in addition to these four, you will also find other patterns in WW2 German reenactment gear, including but not limited to Palmenmuster, Rauchtarnmuster, Erbsenmuster, and Leibermuster.

We carry a wide range of reproduction German field gear, weapons, and accessories, such as Zeltbahns, Mauser parts, and even military decorations. Take a look through our collection and let us know if you have any questions about our WW2 German reenactment gear or the camouflage patterns represented.