Shooting rests, specialized platforms, sandbags, bipods, even shooting sticks. These are some of the things that shooters, both modern and past, have used to steady their aim when trying to connect with a target some distance off. Some shooters have even improved with their backpacks or field gear.

But slings? Who really thinks first of a rifle sling when they’re trying to steady their aim, especially when shooting offhand. Slings are used primarily for carry and secondarily for weapon retention.

At least that was the case until the M1907 rifle sling was developed, which, if we’re being frank, is the best rifle sling design of all time.

It’s not even news. The design is well over 100 years old, and if you haven’t heard of it yet, now’s the time.

The M1907 was originally designed in the United States for soldiers carrying the Springfield M1903 rifle, though it was also later carried throughout WWII by soldiers wielding the M1 Garand. It offers the same benefits to both.

The great thing about the M1907 sling is not just its construction from premium materials. Good replicas (and originals) are made with heavy leather and reinforced with high-quality metal furniture.

What really makes the M1907 rifle sling great is its unique design which has been mimicked countless times since its inception. But the original design, with its two heavy leather thongs, is still the best.

You know the old expressions. You can’t improve perfection. If it ain’t broke, don’t fix it, and so on and so forth.

The reason for this is that the M1907 sling was the first of its kind that enabled shooters a relatively stable platform to steady their aim, even when shooting offhand, while standing, entirely in the absence of any external support.

Here’s how it works. Let’s say you’re carrying a heavy rifle like an M1903 with a full wood stock. These rifles weighed almost 9 pounds. Fortunately, you’re also carrying an M1907 rifle sling attached to the stock.

First, you open up the loop that lies between the two straps of leather that comprise the sling. You slide your left arm up into the hole you’ve just created (for right-handed shooters, that is. The support arm goes through this loop, so if you’re a southpaw, you would slide your right arm through.).

Slide your support arm up through the loop until the loop reaches the top of your biceps at your upper arm. Tighten the loop snugly against this natural notch created by your biceps and deltoid muscles.

Next, place the butt of the rifle snugly in the crook of your support arm at the shoulder, just as you would normally. Due to the tension from the leather sling, the rifle should hold itself in place. It should not want to “pop” out of position and it should be fairly difficult to do so.

With the rifle in this configuration (it can be used for air guns and shotguns, as well) it should be much easier to control the muzzle and keep your sights on target. There’s less play in the sling and it should be difficult to move the gun. Steady your breathing or hold your breath and shoot before you can count to four.

Using an M1907 sling like this can help you significantly shrink your groups, even at distances well beyond 100 yards. It can be used standing, shooting offhand, of course, but you can also use this technique while kneeling or sitting. It can be used to help you boost accuracy in each of these situations.

Additionally, while sitting, the elbow of the support arm can be rested on the top of one of your knees, giving you an even more stable shooting platform. With your elbow on one of your knees, it’ll almost be like you’re shooting from a stable rest or a best. Not quite, but it’s the best substitution you’ll find in the field if you haven’t brought along a pair of shooting sticks and don’t have the luxury of time to improvise them.

It’s also not just suitable for use with the M1903 and M1 Garand rifles which Americans widely carried during the first half of the last century. You can get an M1907 or similarly patterned rifle sling and use it with modern rifles. It’s helpful in competition and can give you a stable shooting rest in the field, at a moment’s notice, making it great for hunting, too. 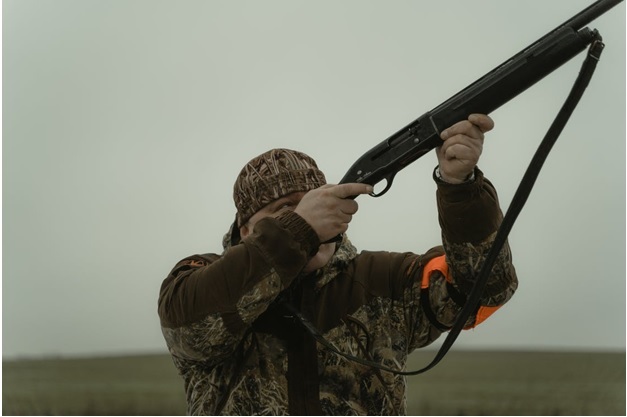 Need an M1907 Rifle Sling?
While we’re confident that the M1907 is the best rifle sling ever developed, that does not make it the only good sling gun sling ever developed. There are plenty of others, and modern technology has created single-point slings and QD slings with quick detach sling swivels.

We carry a wide range of other slings that are just as useful for shotguns, rifles, air guns, and sporting rifles, as well as additional accessories such as gun holsters for handguns. While you’re looking for a new sling don’t miss a chance to get a new pistol holster for your sidearm, too.

If you’re looking for a heavy-duty shotgun sling or a sling for any other sort of rifle or long gun, you’re looking for it in the right place. Take a look through our collection of slings and get in touch with our customer service at 610-250-3960 if you have any questions or need a specific recommendation.