There may not be a more iconic helmet in the history of the world than the M35 Stahlhelm, a German helmet that is still respected for its amazingly protective features, despite the fact that the actual design is at this point over a 100 years old. It’s hard to improve on (near) perfection, and the M35 Stahlhelm is proof of this. Other helmets like the M1 American Helmet and the Pickelhaube Helmets that preceded modern steel variants give the M35 Stahlhelm a good run for its money, but to some, the variants of the Stahlhelm are the most effective helmets that have ever been designed and produced.

It didn’t begin in 1935, however, as the name of the Model 35 helmet might suggest. The origins of the Stahlhelm go back far before the interwar period and have their beginnings entrenched in the - trenches - of the Western Front in the First World War, the War to End Wars. In fact, if it weren’t for the monumental global conflict of the First World War, there wouldn’t even be a German Helmet from the Second World War at all. To understand its development we need to go back to its beginnings.

At the outbreak of the First World War, the warring nations were using technology that had never been used before in battle. As a result, armies were sending saber-armed cavalry into the yawning jaws of machine gun crews and soldiers under the fire of mortar and shrapnel with no better protection than wool or leather helmets. For the first few months of the war, the casualties that both the Allies and Central powers suffered were astounding. One of the most deadly injuries a soldier could suffer was a head wound. Many proved to be fatal; the modern artillery could reach ranges and kill with much greater efficiency than the muzzleloaders that had dominated battlefields scarcely more than 50 years before.

At the beginning of the war, it was customary for the soldiers of both sides to utilize helmets that were made of thick leather or wool. Since the premise of this article is an expose of the history of the WW2 German Helmet known as the M35, we will focus on the helmets that predominated in their camp. 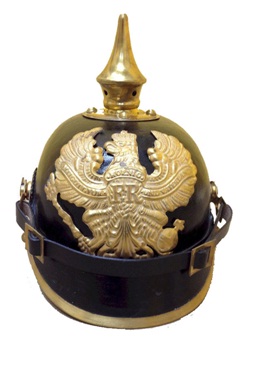 The Imperial German Army was widely using designs of leather and wool helmets that were spiked; these designs have popularly known as “Pickelhaube” helmets and are one of the more popular pictorial representations of the helmets of the First World War.

The problems with these early leather and woolen Pickelhaube helmets went far beyond the limits of the materials themselves. While it is true that artillery fire could easily inflict a lethal strike on a soldier wearing one even from very far away, the designs of most of these Pickelhaube helmets were also woefully inadequate to protect the wearer. In fact, they were so poorly designed that it might even be remarked that it hardly made a difference if they were made from wool or leather instead of steel.

These helmets covered and protected the crown well enough, but completely left most of the brow exposed, along with a lateral exposure of the head. The base of the neck and the back of the head were also terribly protected by these designs. After a few months of mounting numbers of casualties, the Germans knew that they needed a better design. They needed a helmet that would outperform the bygone technology of a simpler time.

The first improvement on this design, and the first model to be known as the Stahlhelm, or ‘steel helmet’ was the model 1916, or the M1916 steel helmet. It was a simple alteration in design, but it afforded significantly better protection to the wearer than the earlier models had.

The M1916 incorporated features of some earlier Pickelhaube helmets as well as pirating some designs from the Adrian helmet that the French forces had designed and taken to using. It was made of steel and provided much better protection to the front and sides of the neck. Its flared design also provided significantly better protection to the back of the head, and to the neck of the wearer.

Even this early model afforded amazing protection, by the standards of the day. Head injuries were nearly expected to result in a fatality, but this new helmet brought protection that the soldiers wearing them had never seen before and could almost not believe. There is even a historical attestation of the surprise a German soldier exhibited when he was struck in the head by a piece of shrapnel and survived. Apparently the soldier in question was struck so violently that he was knocked over and the steel plate of his helmet dented; but the shrapnel did not pierce the helmet and the soldier survived. He expressed great surprise that the helmet withstood the impact and even stated that had he been wearing a different helmet, he would have died.

The first revision of the M1916 helmet came in the form of the updated M1918 helmet that progressed the design even further. It included a new chinstrap that attached to the liner rather than to the “pot” of the helmet which significantly improved the comfort of the helmet. The helmet also featured new cutouts to improve the design of the M1916 and reduce the auditory issues mentioned previously. The flared bottom of the helmet was retained because it afforded so much protection, but the new ports helped to minimize the echoes and auditory distortions that the earlier model produced. The Stahlhelm was starting to take form.

The First World War ended in 1918, and with it came a tenuous peace that put a sort of brake on the production of materials and weapons for war. The M1918 became a standard-issue helmet for many armies during the period immediately following World War One, but no significant alterations to the model were made until more than 10 years had passed.

With the economic disturbance that the world at large hard felt with the coming of the global depression of the 1930s came a massive amount of civil unrest in Germany. Nationalism was on the rise; the Germans began to mobilize culturally and militarily early on in the 1930s despite warm rebukes from neighboring countries.

The M1933 was commission by the Army High Command to lighten and improve the M1918. There’s a catch here - this was a significant alteration to the M1918 Stahlhelm, so extensive, in fact, that calling the M1933 a Stahlhelm would present a bit of misinformation. The M1933 was made of a plastic composite material known as Vulkanfiber. It was light and tough, but it could not match the performance or protection of the M1918, and so again in 1935 alterations were made to improve the design, after which point the M1933 was removed from military service. 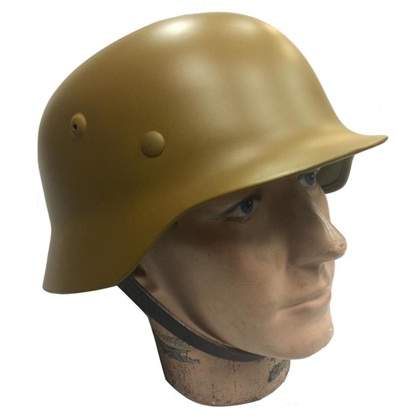 The Army High Command in 1934 began, once again, to make improvements to the earlier model in order to create the ideal steel helmet that offered a balance of low weight, strength and protection against impact.

The design, which became known as the M35 Stahlhelm, was made from sheets of molybdenum-steel alloy. Molybdenum, or moly, as it is sometimes known, is heavy, but extremely strong. The addition to molybdenum in the steel made the helmet significantly stronger and more resilient to impact. Since the helmet would have to offer some degree of protection against shrapnel and even fusillade, this was considered necessary. It was necessary, because the design offered an extraordinary degree of protection, even against fusillade.

The flaring around the neckline and the visor was preserved, but diminished. This allowed the designers to lighten the helmet without taking too much away from its protective features. In fact, these were some of the features that made the design so commendable, since few other helmets affording so much protection to the sides of the head and neck. The English Brodie Helmet, for example, had a brim that flared around the top of the head and didn’t even approach the level of protection that the German helmet provided.

The helmet was also enhanced with respect to the features as they impacted the comfort of the design. The edges of the helmet were rolled, which reduced jagged edges and also made the helmet less likely to hang up on anything, and a new leather liner was introduced to the design. Ultimately, the finished design was lighter, more ergonomic and even arguably more protective than the earlier versions from which it arose. It went on the define the perception of the level of protection that a steel helmet could provide and even today, although we are closing in on 100 years after the fact, the helmet is revered for the genius and simplicity of its engineering. It has even been called the best of World War II.

The versions of the M35 that saw use as a combat helmet during the Second World War were typically painted a color known as Feldgrau, which is something of a greenish-gray and may have served to camouflage the helmet against a woodland surrounding. Nevertheless, it is a feature that we preserve in our M35 WW2 German Helmet.

Not only do we offer plenty of reproduction and authentic helmets from the German forces, we also offer a number of historical helmets from World War II from many other combatant forces as well. Here at Sarco Inc., you can find choices in helmets from American, German, British, Japanese, and even Italian and Bulgarian forces from World War II and other periods in history. Check out our collection of helmets on our site before you go, and if you have any questions on our products or the history behind them, please feel free to reach out to us at 610-250-3960.

We offer much more than just military collectibles and reproductions here in our online store. We’re one of the largest providers of parts and kits for iconic firearms platforms that have become popular through their widespread use or historical significance. Whether you are an owner of a 1911, an SKS, an M1903, or even a Lewis Gun, you can find essential parts and kits for all of these platforms right here on our site.

Make sure you check here first, because our collection is one of the largest and most comprehensive out there, and even if you don’t see the part or model you’re looking for, give us a call at the number listed above. We have access to even harder to find parts and accessories than you will see listed on our website and can put you in touch with them if you need a little help. Our customer service is second to none, just like our selection, and we aim to prove it to you.