Saving Private Ryan was released in 1998. It has been praised for its graphic representation of war, for its unorthodox use of handheld cameras, and is credited with renewing pop-culture interest in World War II.

It was the highest-grossing film of 1998, received widespread critical acclaim, and is considered by many not only to be one of the best war films but one of the greatest films of all time.

It’s also been praised for its observation of minute, obscure historical details.

In one of the scenes in the movie, Private Daniel Jackson can be observed with an odd bruise on his left thumb.

Most viewers probably didn’t even notice.

However, to those of you that are familiar with the action of an M1 Garand, this was immediately recognizable as “Garand Thumb,” which, apparently, was a common injury among American soldiers in the Second World War.

So, what’s the deal?

Loading an M1 Garand with a Clip
The vast, vast majority of modern rifles, both repeaters, and auto-loaders, feed from detachable box magazines. These can be loaded from the top of the open action, but it’s much easier to drop out the mag, load it by hand, and stuff it back in the bottom of the rifle.

Even the rifles that don’t have detachable box mags typically have tube mags, in the way of lever guns, and so on and so forth.

The M1 Garand is not like this. It features a fixed internal magazine that must be loaded from without, through the open action.

Rounds can be loaded individually, but a device known as an M1 Garand clip facilitates loading. These are En Bloc clips that hold ammo in place, feeding it into the action. The magazine holds the clip, the clip holds the ammo, and the bolt strips it off into the chamber, readying for firing.

The clip holds ammo and makes it easier to “strip” off the ammo through the magazine. M1 En Bloc clips held 8 rounds of .30-06 Springfield ammo. (They’re often referred to as M1 Garand 8rd clips).

With an empty, unloaded M1 Garand, when the bolt is drawn backwards, it locks into position, with the action open.

When the clip is inserted into the magazine and pressed all the way down, the bolt snaps forward, stripping a round off of the En Bloc clip and into the chamber, cocking and loading the rifle in the process.

Inexperienced M1 Garand shooters - especially today - are wont to press the clip all the way down into the action using the top of their thumb. When the clip is fully depressed, the bolt will often automatically snap forward on the user’s thumb, slamming it forward into the breech face.

This is a very unpleasant, surprisingly painful experience, as the springs that operate the M1 Garand’s bolt are quite powerful. It’s enough to cause quite a bruise, and it hurts a whole heck of a lot.

This occurrence is the origin of the term “Garand thumb” that plagued soldiers in World War II and still plagues recreational shooters and WW2 reenactors today.

There is a way to avoid the curse of Garand thumb. Actually, there are a few ways, but they all require conscientious handling - which should go without being said since we are talking about handing firearms, here.

For right-handed shooters, grip the rifle’s stock underneath the action with the left hand. Using the pinky or back edge of the left hand, restrain the bolt handle in the open position to prevent it from snapping close. Insert the En Bloc clip, then remove your thumb before releasing your hold on the bolt handle.

The bolt should snap closed. If it doesn’t, tap it forward to engage it.

An alternate method is to wrap the fingers of the support hand under the rifle and up to the bolt handle. This is a little bit harder but gives much more freedom to the right hand while loading.

Restrain the bolt handle with the non-dominant hand, press in the clip, and release your grip. The bolt will snap closed. If it doesn’t tap it forward to engage it.

There’s your secret recipe for loading an M1 Garand without ever having to experience the misfortune of Garand thumb. 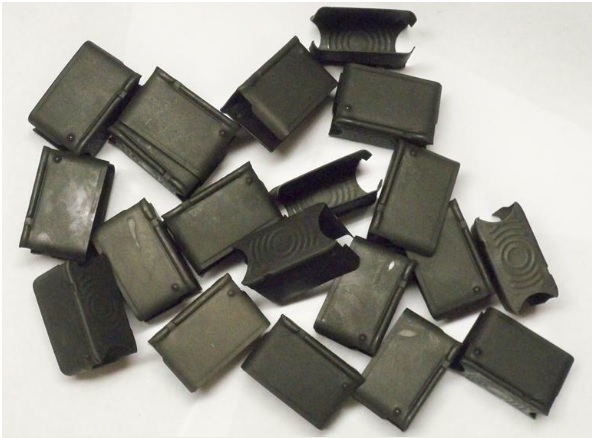 Enough History! I Have a Garand and Need an M1 Garand Clip!
If you’re here looking for an M1 Garand clip, you’re in luck. It turns out we don’t just have the know-how to help you avert the crisis that is Garand thumb - we have the stripper clips you need to practice, too.