So you’re the proud owner of an M1911 pistol or any of the countless variants that have been widely produced throughout the gun’s lifespan, which is more than a century long at the time of this publication. Great, you can join the ranks of the other proud owners around the country and the world, which is difficult to determine but number higher than 2 million.

What’s not to love about the 1911 or one of the variants that has been produced based on its dimensions, functionality and chambering? Most models of 1911 and all originals have been made with a slim frame that is milled from solid steel and is almost literally bombproof. That’s a skeleton that won’t ever take you awry. The 1911 is one of the most durable and dependable handguns that has ever been produced.

Then there’s the reliability of its action, the comfortable indexing and ergonomics of the platform, and the fact that the trigger only moves along one dimension. These are all shooter friendly features that make the firearm more comfortable and make it possible to develop better skills and accuracy when practicing with one over time, but it doesn’t end there.

For another thing, although the pistol is still widely chambered in the original .45 ACP (Automatic Colt Pistol) cartridge that replaced the aging .38 Long Colt caliber revolver rounds that the U.S. Armed Forces used at the start of the 1900s, it is also available in a number of other highly sought-after cartridges, including but not limited to 9mm, 10mm, 40 S&W and many others.

This makes the 1911 not only very popular among collectors for its historical value but also as a pistol for competition shooting or self defense. That means that many parts and accessories are very in demand for this platform. As a result, you can find many parts and even kits for M1911 pistols here at Sarco, Inc., among many other necessaries.

Among those other necessaries is the odd 1911 holster that you’re going to want at some point or other. A must for those who would carry and equally valuable just for those who would like to create a display, a 1911 is nearly as in-demand as a build kit. In this short guide we’re going to take a look at a few things you will want to consider in order to pick out a holster for your 1911 that you will love.

Is it for carry or display?

The first thing you’ll want to clear up right out of the gate is the reason for the purchase, which will dictate everything else. Namely, this means you need to determine if you’re looking for a 1911 holster because you intend to carry the pistol or you just want a nice holster to make a display look good.

In the event that you don’t intend to carry the pistol, then you’ll do just fine with basically any 1911 holster that catches your eye because that’s the only thing a display really needs to do. It just needs to catch your eye and to catch the attention of those that tarry within the vicinity of the display.

M1911 pistols may be slim, but with a full magazine they are nothing to dismiss. This is a heavy pistol; even models made with synthetic composite components wouldn’t really be called light. Therefore, comfort comes into play as well, and the first thing you’ll want to determine is if you want to carry concealed or openly, and then in what configuration.

Where do you want to carry?

Of course the first thing to do, before even getting a holster, is to ensure you have the proper permits and dispensation to practice carrying, whether concealed or openly, in your jurisdiction. Secondly, you’ll want to account for where you want to carry the pistol, since most 1911 variants are fairly large and heavy. It’s not like a Taurus Judge or a Smith & Wesson 500 or anything of that nature, but it’s no small handgun.

Here are some of the most popular configurations in which you’ll find 1911 holsters. 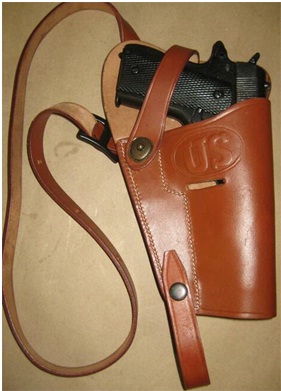 Shoulder harnesses, when sized and adjusted carefully, afford a pretty good fit and can be very comfortable to wear. Unlike some hip holsters which will tug on one side of your frame, when a shoulder holster is adjusted properly, it can be very comfortable and will distribute the weight of the firearm well. In addition, a lot of shoulder holsters come with the ability to add accessories like additional magazines to a pouch located next to the firearm or across your body, to even out the weight.

There’s also something that’s very aesthetically pleasing about some shoulder holsters, and when you couple up the fact that they enable you to carry in a number of attitudes, they seem even more practical.

Many shoulder holsters will allow you to carry either horizontally or vertically, and some will enable you to carry the 1911 at an angle, which is surprisingly ergonomic in terms of drawing the firearm. These types of gun holsters are fairly practical for concealed carry with the right clothing as they will not give themselves away and the way your arm falls along your torso where the 1911 pistol is holstered will help to shield against printing.

If there is one drawback to these types of holsters, it might be that, despite their class, it’s hard to draw from them quickly. Otherwise, they’re very ergonomic and practical, not to mention the fact that a Colt 1911 hung inside of a leather holster designed for shoulder carry, even as a part of a display, looks pretty smart.

-Inside and outside waistband

IWB holsters are some of the most popular holsters on the market today for concealed carry, because the waistband of your pants helps to secure the firearm as well as to obscure the lines of the holster and the firearm.

Either of these methods is practical for a few different reasons. For one thing, both of them offer you relatively quick and easy access to your firearm, but the upside is that these methods for carry are also very secure with the right holster. You obviously need to see some of the considerations that we will mention further along in this article, but the right holster can offer you a very secure method for carrying, either open or concealed, with one of these.

-Open carry on the hip

Carrying on a hip or belt holster, outside the waistband, is arguably the most common method of openly carrying a firearm. It certainly is the iconic method for carrying, and it probably evolved, in part, from the saddle scabbards that once housed rifles and revolvers. These are some of the firearms that the Colt M1911 was designed to replace, and without a doubt, some of the classiest leather holsters on the market today are designed for being carried on the hip on the belt. 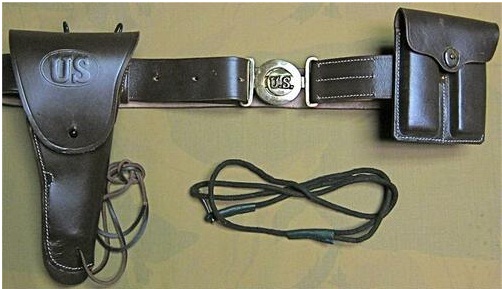 There are also some very high quality, heavy leather hip holsters and synthetic holsters (like nylon or Kydex) that are safe, practical, and ergonomic. If you’re looking for a 1911 holster, you may come across more of these options than any other.

Our collection of 1911 holsters features a strong showing in belt holsters, many of them crafted of beautiful leather construction. In addition to these above mentioned facts, since holsters designed for open carry don’t overly account for discretion, they can be made much more robustly, which is a bonus as far as security and retention are considered. In addition, since they are meant to be seen, these are often some of the most ornately embellished and decorative holsters out there. Check out our collection via the link above if you want to learn more about what we can offer and to see the different styles in our collection.

These are only a few of the locations in which 1911 owners carry their firearms, and only a few configurations at that. If you want to learn more about the many different types of holsters that you can find out there, make sure you get in touch with us. We’ll tell you a little bit more about the relative merits of each and put you in front of options!

In addition to the considerations you’ll want to make above to ensure that you are carrying your firearm in the method that is most practical to you, you’ll want to assess each holster on its own individual merits, and among them are the function and aesthetics.

For example, you’ll want to take a look at how the holster secures the firearm. For example, some holsters secure the firearm via a strip of leather across the back of the grip that can be easily undone in order to retrieve it. Some of them feature a flap of heavy leather that folds over the top of the gun and completely encloses it. There are others besides these as well.

In addition, you’ll want to consider the visual allure of the holster, we mentioned above, but that should be at best a secondary consideration.

Material is another thing that you will want to account for, as the material from which a holster is crafted will affect not only its security but also the level of attention you will have to pay in terms of maintenance.

Many 1911 holsters are made of leather, which is very tough and can be finished beautifully, but will degrade over time unless you maintain it fastidiously. Many leather holsters are wet formed to the firearms for which they are designated and offer an impressively secure fit.

Then there are synthetic holsters, many of which are made from nylon or Kydex. These holsters don’t require the same care and attention as leather, but they also lack the aesthetic character. In addition, they also typically afford a very precise fit.

Retention is one of the most important things you will need to account for in a holster, as it will affect the overall security of the holster. The basic point here is that the holster needs to secure the firearm in question, without allowing it to shift or slip. In addition, the holster should secure the firearm against any infractions except a purposeful attempt by the user to draw it.

Trigger coverage is also very important, and some holsters even incorporate an actual trigger lock to prevent engaging the trigger while the firearm is holstered. All holsters should entirely cover the trigger area, including so-called quickdraw holsters.

Finally, you’ll want to consider ease of access as well as the ergonomics and the comfort of the fit of the holster. If you esteem concealment and security over being able to quickly access your firearm, then a holster that completely encloses the firearm will be preferable to you, and vice-versa. As long as you account for security, the rest is up to you.

There’s only so much that can be learned about a 1911 holster through reading, and a lot more that needs to be experienced. The rest is a gray area, and we can help with some of the details that straddle this. Give us a call if you need more pointers and we’d be glad to help.

Otherwise, see our collection of 1911 holsters and via the link above as well as 1911 parts, and while you’re here, don’t miss a chance to investigate our parts, kits, ammo and more for many popular and historical firearms. If you have any questions at all, call us at 610-250-3960 and we’d be glad to help.