While you may have been familiar with Sarco, Inc. as your go to place to find firearms parts and accessories, you may not have realized that we also carry an extensive line of military collectibles, many of which are fully functional and faithfully reproduced. On top of our catalog of hard to find firearms parts and accessories for hundreds and hundreds of different platforms, we also carry many different reproductions and collectibles, including a vast sampling of WW2 helmets, many of which can be hard to find elsewhere. Check out these highlights from our collection.

Helmets of the Allied Powers

If you happen to be a collector of militaria from the Second World War, then you can’t miss some of these helmets that you will find in our online store. Read on to learn more about each.

Some might say that the M1 type U.S. Helmet is one of the most influential helmets that has ever been produced. Then there are others that would argue the iconic image of some Pickelhaube or the longevity and far ranging fame of the Adrian helmet has it beat. Be that as it may, the M1 Type U.S. Helmet saw plenty of service through many conflicts and has that to its name. If you were to add one helmet to a list of U.S. collectible memorabilia, it would have to be this one.

The history of the M1 is long and colorful, and variants of the M1 saw service beginning in World War 2 and were in service through the Vietnam War. In fact, the M1 was standard issue all the way until 1985 at which point it was finally replaced. Due to its extensive service history and the fact that the M1 was carried by American troops in several key global conflicts of the past hundred years, M1 helmets are highly coveted by collectors.

The M1 helmet consists of two parts, the steel pot and the liner, which makes it possible to fit basically any head shape into one steel pot. This design was extremely versatile and was one of the traits that gave the M1 such utilitarian value in the field. Because of its design, the M1’s steel pot could be used in many makeshift manners. At times soldiers used the steel pots of their M1 helmets as shovels or entrenching tools, buckets and even as seats.

Regardless of your personal opinion of the M1 helmet, it is firmly enthroned in the halls of history, and so, we offer our own Type 1 European Production M1 modeled after the American M1. Our M1 Helmet comes with the steel pot, liner and suspension as well as chinstraps, a sweatband and a helmet net.

Any history buff who recognizes the influence and importance of the American M1 is unlikely to be a stranger to the Tommy Helmet, which can also be known by its official name, the Brodie Helmet, as well as other nicknames such as the “Battle Bowler” and “Tommy Helmet.”

Even if only for the fact that the Brodie Helmet influenced the design and development of the M1917 Helmet that became the standard issue for forces of the United States before it was replaced by the M1 mentioned above, its influence is profound.

Unbelievably enough, at the start of the First World War, there were very little steel helmets being used in battle. Unsurprisingly, the overwhelming incidence of head injuries led armies to fast track the need for steel helmets to protect their troops from shrapnel, artillery fire and fusillade. England’s need for enhanced protection against modern projectiles came in the form of the Brodie Helmet.

That was in the First World War, however, so you may find yourself wondering how this helmet has made a showing in our list of WW2 helmets. That question is answered easily enough - the Brodie Helmet offered such an astounding degree of protection against modern weaponry that it stayed in service until WW2. It was standard issue for British Commonwealth Forces whereby it saw service all over the globe until it started being gradually replaced around 1942.

Our British WW2 Tommy Helmet is a faithful reproduction of the models used by the British Forces in the early years of the Second World War. Our reproduction is faithful not only in size and weight but in color and in the accessories it includes, such as the liner, chinstrap and rubber accents.

Helmets of the Axis Powers

We’d be remiss if we didn’t include some insight into some of the helmets we offer that are reproduced according to the specifications of models commonly utilized by Axis powers. Whether your interests lie with the equipment utilized by Nazi Germany, Fascist Italy or Imperial Japan, our collection contains examples of each. 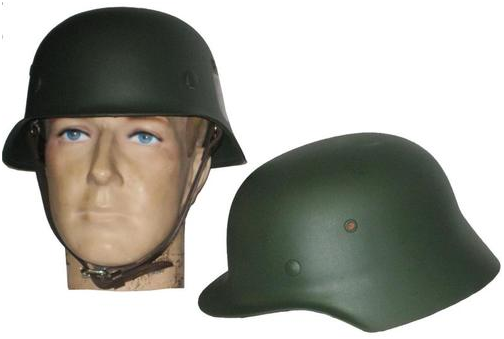 Some people have called the German M35 (Model 1935) also known as the Stahlhelm, the greatest helmet to see service during the Second World War. The other big contender is the U.S. M1 that we explored above. There are people on both sides of the fence, but there certainly are a number of adamant proponents of the Stahlhelm that accredit it with being the most effective design of WW2, if not the most effective design in history.

The German M35 helmet also has the distinction of being one of the most recognizable helmets ever produced. Even without insignia or a person below the helmet to showcase a uniform, you can almost just recognize the helmet by its shape. The M35 proved through its usage in combat to be impressively effective not only against projectiles but against the percussive shock of detonating charges as well. Because of its superior construction, it saw widespread use by the Germans throughout World War 2 and even more widespread use thereafter. These helmets, or variants of them, were widely used by the Finnish, Irish, Chinese, North Koreans, as well as many new world forces in Central and South America.

The M35 was developed originally as an improvement over models that the Imperial German forces used through the First World War. Improvements were made to the chemistry of the steel as well as the design of the helmet. These improvements made the helmets lighter, stronger and more comfortable for the soldiers who wore them.

Our M35 helmets are faithfully reproductions of some of the M35 helmets that saw use in World War 2. It comes with a leather liner and chinstrap and is painted in the Feldgrau or “Field Gray” color in which the original helmets were typically painted.

In addition to our reproduction M35 helmets we also offer reproductions of some of the flak helmets that were issued to German pilots and crew who mostly served on the Eastern Front of World War 2. Anti aircraft fire was a constant hazard to pilots flying into hotly defended hostile territory and claimed its fair share of aircraft and crews. As a result many of the pilots and their crews flying into these areas were given the additional protection of helmets like these on top of traditional standards like flak jackets. Fragments could prove lethal and helmets like these were likely responsible for safeguarding the lives of more than one aircraft crewmen.

Our reproduction Luftwaffe Flak Helmets are modeled after some of the M35 and M40 German helmets that were repurposed to make them more suitable for the work performed by pilots and aircraft crewmen. Our flak helmet comes with a liner and ear cutouts as modeled after some originals.

We’ve managed to obtain a number of these original Italian M33 helmets in good condition and are offering them for sale while they last. The Italian M33, modeled after 1933 when it was developed, was one of the Italian models that saw significant and widespread use during Italian campaigns in World War 2.

The M33 was designed by the Italians to replace the aging Adrian Helmet that saw so much use in the First World War. Though the Adrian Helmet offered significant and impressive protection against many hazards, Italian nationalism was running hot in the 30’s and more than likely contributed to this homegrown design. Whatever the case, the M33 became standard issue for many Italian forces and remained in use through the Cold War. In fact, the M33 remained in use all the way up until the 1990s.

While it is not commonly accepted that the M33 offered the same level of protection as the German M35, it was and is still seen as an improvement over the Adrian Helmet that it replaced. Even so, shortages during the war caused some troops to be issued older Adrian Helmets anyway.

Today these helmets are becoming increasingly hard to find. Unlike the other helmets that we have explored so far, these are originals, so get them while you can.

Our Japanese WW2 Army Helmet comes with a net and is very similar to the Japanese M1932 helmet that was used as the standard issue for troops of the IJA during World War 2. Ours, however, is made to an even more exacting standard and might even offer better performance than the original Japanese M32 helmets provided.

The original M1932 helmets were developed to replace aging designs that were in widespread use before the 30s, unfortunately the improvement itself was made of a poor grade steel and had a relatively lackluster reputation. It was not widely regarded as offering a high degree of protection, even being prone to shattering or deforming under stress which could be fatal for the soldier wearing it.

Nonetheless, they represented an improvement over the designs they replaced and went on to be nearly universally used by Japanese forces during World War 2. The M1932s used by both the IJA and IJN were effectively identical with the exception that the Naval version had an anchor at the front whereas the Army version had a star; ours is modeled after the Army version. They come with a suspension, chin strap and net and represent remarkable quality of construction. 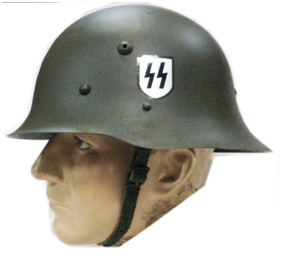 Bulgaria’s interesting history of involvement in World War 2 means that technically we could have included it in either of the sections of this article. Regardless, if you’re looking for WW2 helmets, you’ll be pleased to see what we can offer on this front.

Bulgaria has one of the more interesting histories among the nations that participated actively in both World Wars. Like Japan and Italy, which sided with the Allies in the First World War but then later went on to fight in alliance with the Axis Powers in the second, Bulgaria’s allegiance switched. However, Bulgaria, which fought alongside the Central Powers in the First World War, didn’t just flip between wars. It flipped during the course of WW2.

Initially Bulgaria was neutral at the outbreak of the war. From 1941 to 1944 Bulgaria fought with the Axis powers, at which point it switched sides to fight with the Allied Powers.

Here at Sarco Inc., we can offer you an interesting piece of history from this country during the Second World War. We offer original Bulgarian M36 Steel Helmets that would have been used in cooperation with the Waffen SS until they were defeated and fought for the Allied powers. Our original helmets come with a liner and chinstrap along with an SS decal.

Regardless of which of these options appeals to you for your usage in collection, reenactment or some other pursuit, we offer these and many others here on our site. In addition to these WW2 helmets from our collection, we offer a number of other reproduction helmets from other places in the world and periods in history among our wide collection of military and historical collectibles.

If you found your interest piqued but would like some more information on these helmets, give us a call at 610-250-3960 and we’d be glad to offer up some more gems of knowledge about the past. Browse our website or give us a call - till then, we look forward to hearing from you.