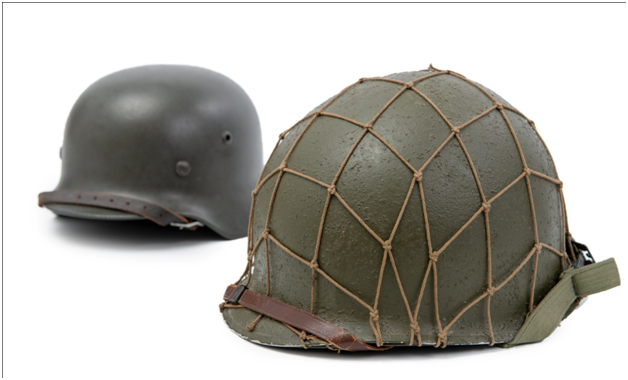 Designed in 1915 by John Leopold Brodie, the Brodie helmet was the first of the three main World War 2 helmets to come into existence. John Leopold Brodie was an entrepreneur and inventor who had made his fortune in the mines of South Africa. He designed the Brodie helmet as an improvement upon the French Adrian helmet, simplifying and strengthening the Adrian’s design. Pressed from a single sheet of thick steel, the Brodie helmet augmented its steel shell with innovative lining arrangements. Brodie’s design took influence from the medieval infantry kettle hat, a type of steel helmet made in the shape of a brimmed hat, which provided its wearer with extra protection from projectiles. At the outbreak of World War I, none of the combatants provided steel helmets to their troops, which generated a huge number of lethal head wounds that resulted from the shrapnel of modern artillery weapons. The helmet’s soup-bowl shape and wide brim was designed to protect the wearer’s head from shrapnel shell projectiles. The original design was made from mild steel with a brim two inches wide. It was only briefly in production before the metal was altered to a harder steel with 12% manganese content, known as Hadfield steel. This steel greatly increased protection for the wearer, able to withstand a .45 caliber bullet fired from a distance of ten feet. Both US and English troops used this helmet in World War I, and, by the end of the war, almost eight million Brodie helmets had been put into production.

After 1936, the Brodie was fitted with an improved liner and an elasticated chin strap, a variant which served until 1940, when it was superseded by the Brodie Mark II, which served the British forces during the Second World War.

US troops used the Brodie helmet up through 1941, when it was replaced by the M1 helmet. The M1 helmet became the standard for US forces throughout World War 2. Designed based on research done by Major Harold G. Sydenham, over twenty-two million M1 helmets were produced through 1945. The M1 consists of two elements—an outer metal shell, and a hard-hat-type line nestled within the shell. A suspension system was inserted into the helmet to provide custom fitting to the wearer’s head. The M1 uses the same Hadfield steel as the Brodie helmet, smelted en masse at Carnegie Steel and Sharon Steel into fifteen ton ingots, also known as heats. Each of these heats was assigned a unique number by the smelter, and processed into smaller batches, which were then sent to McCord or Schlueter (fabricators), who assigned each heat a sequential number, and each lift (or smaller batch) a letter of the alphabet. This lot and lift number was stamped on to each helmet, allowing each helmet to be traced in case of defects. The steel shells were drawn to a depth of seven inches, creating the helmet shape, and trimmed to provide a smooth edge. The design of the shell led to some novel uses: as a hammer, washbasin, bucket, seat, and cooking pot.

On each side of the shell stainless steel loops were appended for the chinstrap.
The M1 featured sewn-on cotton web chinstraps, which most soldiers wore unfastened or looped around the back of the helmet, because of the dangers associated with wearing the chinstrap in the event of a hand-to-hand encounter, or an encounter with a bomb or artillery shell, the force of which, soldiers believed, could cause the chinstrap to snap their necks.

The original liners for the M1 were made from a mix of paper fibers combined with phenolic resin, over which olive drab twill was stretched. These liners were discontinued in November 1942, because they degraded in high heat and humidity, and were replaced by evolving plastic liners made from strips of cotton cloth bathed in phenolic resin. These strips of cotton were then draped in a star-shape over a mold, and pressured into the form of a liner. M1 liners for paratroopers involved further construction—a short piece of webbing that held the nape strap at the back of the neck was extended around the side of the line, and formed into yokes that had buckles for an adjustable chin-cup made of molded leather. Two snaps on the inside of the line helped to keep the liner settled inside the helmet’s shell during the abrupt and violent motion that accompanied the parachuting process.

The liner’s suspension was made from strips of rayon webbing stretched across the inside of the liner, to which a sweatband was clipped and adjusted to fit the head of the wearer. Three triangular rayon bands met at the top of the helmet, where they could be tightened or loosened by a shoestring to fit the height and shape of the wearer’s head. Later, it was discovered that they rayon had a tendency to stretch, and was replaced with herringbone twill cotton webbing.

The M1 helmet is the iconic helmet of World War 2, extremely popular with militaria collectors the world over. At Sarco Inc., we have a US M1-style olive drab helmet complete with liner, chinstraps, suspension, and sweatband. These helmets have seen little use, exhibiting excellent condition. One of these helmets would make a great gift for a wear veteran, Vietnam veteran, or anyone who served up through the 1980s. We also sell multiple helmet covers, including the classic camouflage-patterned helmet covers used during the Second World War. These covers were made from two semi-circular pieces of cloth stitched together to create a dome shape. They are secured to the helmet by folding their ends into the steel pot, then placing the liner inside, trapping the fabric between the material and the liner. We also sell multiple nets, which had been used during the war to reduce the helmets’ shine when wet, and to facilitate the addition of burlap scrim or vegetation that a soldier might want to add for camouflage purposes.

Those are the Allied World War 2 helmets.
German World War 2 Helmets, called stahlhelms (German for steel helmet), came into service in 1916, replacing the traditional Prussian pickelhaube (from the german for “point” and “headgear”) as the standard helmet for German military officials. Development of the stahlhelm began in 1915, when Dr. Friedrich Schwerd of the Technical Institute of Hanover carried out a study of head wounds suffered during trench warfare, and recommended replacing the pickelhaube, which was made from boiled leather, with a steel helmet. The Kaiser Wilhelm took notice of Schwerd’s recommendation, and subsequently ordered him to Berlin to begin oversight of the new helmet’s development. Schwerd tested a selection of German and Allied headgear, before landing on the 15th-century sallet, a late-medieval knight’s helmet that provided adequate protection for the cheeks and neck, which Schwerd believed would be essential in handing the shrapnel fire now ubiquitous in trench warfare. The most noticeable feature of the sallet was the length of the helmet tail, which protected the back of the neck. In the stahlhelm, this translated to a slight fan in the back of the steel shell.

After producing thirty thousand units, field tested by the First Assault Battalion of the German army, the stahlhelm was approved for general issue in 1916, where it was dubbed the M1916, or Model 1916. The first troops to use the M1916 were the stormtroopers (not the Imperial soldier from Star Wars, but specialized Gewrman shock troops specially trained in infiltration tactics) of the Sturm-Bataillon Nr. 5, captained by Wilhelm Rohr, a pioneer in assault tactics, who equipped his shock troops with machine guns and flamethrowers.

The Germans used a martensitic silicon / nickel steel to produce their helmet, which made it much harder than equivalent Allied steel helmets, but increased the cost of the helmet’s production, because the material necessitated the use of die-cut machines heated to split through the steel. Similarly, the helmet’s design could not be fabricated in one piece, and required machine assembly.

While the M1916 helmet provided excellent protection, it was not without its flaws. A pair of ventilator horns often let freezing air in during the winter, which the soldiers blocked out with mud or fabric, and its large, flared skirt made it difficult for soldiers to hear, creating an echo when the wearer spoke. In 1918, extensive redesigns were made to the M1916 model. A new chinstrap, attached directly to helmet liner, was introduced. Most importantly, the M1918 added cutouts to the rim along the sides of the helmet, which improved hearing and reduced the echo caused by the helmet’s skirt.

But the most radical changes came in 1935. With the possibility of a new war looming, tests began on an improved stahlhelm. Dr. Friedrich Schwerd once again took the lead, directing the Eisenhüttenwerke company of Thale to carry out prototype design tests. Pressed from sheets of molybdenum steel, the new helmet reduced the size of its visor and skirt, removing the lugs that projected from the M1916 model. The ventilator holes were retained, but were made much smaller, to help keep the soldiers warm during the winter. The edges of the stahlhelm’s steel shell were rolled over, smoothing the edges of the helmet. And, finally, a new leather suspension liner was added to the helmet that greatly increased the helmet’s safety, adjustability and comfort. Compared to the M1916, the M1935 was lighter, more compact, and far more comfortable to wear.

Over the first two years after the M1935’s introduction, more than one million helmets were manufactured. Millions more were produced over the succeeding three years, until 1940, when the helmet’s design and production methods were changed. For the M1940, automated stamping methods were incorporated into the helmet’s manufacturing process.

Two years later, wartime demands necessitated the creation of the M1942 design. In the M1942, the rolled edge of the shell was eliminated, reducing the protection provided by the helmet, but expediting the helmet’s manufacture, and reducing costs. Decals on the stahlhelm were eliminated in 1943 to speed up production and reduce the helmet’s combat visibility.

Decals?
Being a highly regimented, military culture, almost every military, naval, or political organization in Germany had its own unique insignia. After stahlhelm shells were painted, the colors, identification, or shield of whichever organization was affixed to the helmet. The right side of early M1935 helmets bore the traditional national colors of the pre-WWI German Empire. The left side of the dell received the decal insignia of the armed forces, wehrmacht, or Nazi organization of the individual to which the helmet belonged. The army displayed a black shield with a frontal view of a silver German eagle holding a swastika in its talons (known as the reichsadler, or imperial eagle), while the navy had a golden reichsadler. The SS decal was its famous, runic lightning-bolt initials. As the war progressed these decals were gradually abandoned.

Sarco, Inc. is your stop for a World War 2 Helmets. We stock the classic M1935 German helmet with a rolled edge, metal banded liner, and leather chinstrap assembly, as well as the M1 and Brodie helmets. These helmets are great for static displays or reenactments. We also provide a set of helmet decals at no extra charge. In addition to the classic M1935, M1, and Brodie, we also stock a number of other World War 2 Helmets including Luftschutz helmets, Africa Korps helmets, German Paratrooper helmets, M1 civil defense helmets, and Danish military police helmets.

At Sarco Inc., we’re proud of our stature as one of the largest surplus war materials dealers in the country. Since starting out in an attic apartment, we’ve expanded into a number of different channels, including World War 2 militaria. Check out our inventory online or give us a call today. Our 7,000 square foot showroom stocks over 2,000 firearms—products ranging from original militaria to new commercial tactical accessories. We provide retail and wholesale product on both the domestic and international levels. Contact us today at (610) 250-3961 to get started with your Sarco Inc. experience.