Looking for a new handgun for your safe that you can actually shoot and which hopefully won’t break the bank? Don’t buy new ones. Don’t even buy used.

Instead, look for surplus handguns for sale.

Depending on the model, you can often get a serious steal among surplus handguns (and rifles and shotguns, for that matter) and if you’re lucky, the gun might have seen little service, been well cared for, and still perform.

We’ve published on this topic before, so here are some more surplus handguns for sale that you should buy when you find them.

The Makarov, affectionately known as the “Mak” by collectors, is like the third-world 1911- although we don’t say that with a pejorative slant.

We say that because the Makarov had an astonishingly long production history (1951-present, it is still produced in some countries) and a service history just as long.

It’s reliable, straightforward, and tough as nails, which is why so many countries, including but not limited to Russia, China, Vietnam, Cambodia, Cuba (and countless others, most of them “scary third-world countries”) adopted them.

It shoots a relatively oddball cartridge (9x18mm Makarov, which looks suspiciously like a 9x19mm Parabellum cartridge but is not) but other than that, these are pretty reliable guns, and since they have been so widely produced, you may be able to find one at a good price.

It’s not a 1911, even though it might look a little like one. It’s a Browning Hi-Power, and it makes one of the best surplus pistols for sale in the whole industry.

The Browning Hi-Power, models of which can accept double stack magazines and which are chambered in either .40S&W or 9mm, has been used in official service in more than 50 countries around the world.

Consequently, they offer incredible value in terms of price, reliability, durability, power, availability, and availability of ammo. Some consider them among the best surplus pistols of all.

Also not a 1911, but again, it looks a bit like one. These, like Browning Hi-Power handguns, are excellent semi-automatic pistols. If you can find one in a surplus collection, you should definitely consider getting it.

The Swiss P49 was in official service from 1949 until 1975 and was famed for its accuracy, durability, reliability, and handling.

One thing you’ll notice about the P49 is that it has a heel-style magazine release (common on European pistols) whereas American models typically feature a button or a lever further up near the trigger guard.

If you can get past that, it’s a great pistol to own and shoot.

Oh, but you’ll need to get past the price tag, too. They are excellent surplus handguns for sale, but Swiss P49 pistols are rare and typically come with a price tag that gloats the fact - often to the tune of several thousand dollars.

If you see a CZ-83, there’s a good chance you might mistake it for a CZ-70 or even a CZ-52. All three of them have that sort of muzzle-tapered design, which they actually share in common with the Mak mentioned above.

But the CZ-83, which is no longer in production, makes a pretty solid surplus handgun, and since it’s chambered in a variety of common cartridges including .32 and .380 auto, it shouldn’t be too hard to find ammo for it, either.

One of the great things about the CZ-83 is that it accepts a double-stack magazine, so despite its small stature, there are variants that can accept 12 and 15-round magazines.

The CZ-82 also has pretty comfortable grips and decent ergonomics, too, which you’ll appreciate, and since it has a relatively small footprint and is chambered mostly in light-kicking cartridges, smaller framed shooters might appreciate that too. 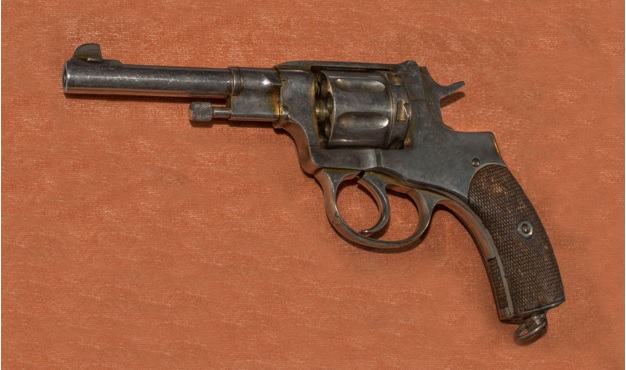 We needed to include at least one wheelgun in this list, and the Nagant 1895 makes the grade.

The Nagant M1895 was in service from 1895 when it was first issued all the way through the 1905s. Apparently, in some far-flung corners of the world, the 1895 pistol was in service in some areas until the early 2000s.

These revolvers are extraordinarily durable. They can take serious abuse and continue to function without hiccups.

In addition, they feature a unique gas seal design; the cylinder moves forward when the hammer is cocked, eliminating the gap between the cylinder and barrel.

This added shot power and substantial muzzle velocity. The M1895, which fired the 7.62mm Nagant cartridge, an odd-looking round, was capable of producing muzzle velocities of nearly 1,000 FPS – surprising for this cartridge and gun.

These revolvers are not without their drawbacks, though. As iconic as they are, you might have a tough time finding ammo, and moreover, trigger pulls are amazingly high - reaching nearly 20 pounds in some cases.

Questions About These or Other Surplus Handguns for Sale?

Questions about any of these surplus handguns for sale? Need information on parts or ammo? Come visit us at 50 Hilton Street in Easton, Pennsylvania, or give us a call at 610-250-3960 and we’ll be glad to help.